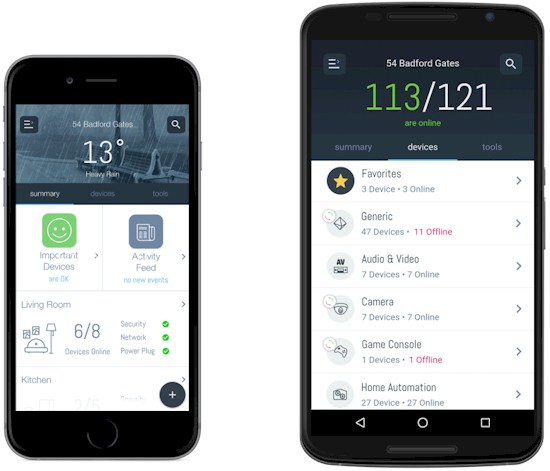 Domotz is a new company with an interesting take on network management. Their mission "is to make all of your home devices work together, better, smarter, faster and in-harmony by helping you resolve technology related issues".

The Domotz vision is that as each of us acquire more network-enabled stuff, our networks become more challenging to maintain. Each of our devices may have some level of support, but, by and large, it is up to the individual to make it all work well together. Domotz wants to help address that challenge.

Domotz offers two products. Domotz DIY, launched at CES 2016, is targeted at home users and designed for monitoring up to four networks. Domotz DIY runs on either a Raspberry PI or select NASes.

Domotz Pro is designed for networking professionals, VARs and businesses, handling five and "up to thousands" of networks and unlimited devices. Pro requires a Domotz Box, which will be a small Intel-based Linux appliance. Domotz Pro is expected to be available by the end of the second quarter 2016.

As mentioned, you can run Domotz DIY in one of two ways. Option 1 is to install Debian Linux (Raspbian) Operating System (OS) and the the Domotz agent on your own Raspberry PI computer. Domotz is working on, but doesn't yet have, a version of this product, called Domotz Mini; a custom Raspberry PI with the OS and Domotz agent pre-installed. Option 2 is installing the Domotz agent on a Synology, QNAP, or NETGEAR ReadyNAS NAS.

Domotz sent me a Raspberry PI with the agent software already loaded, so I did not have to install software on either a Raspberry PI or a NAS. For installation support, Domotz' support site has step-by-step instructions for installing the agent on a Raspberry PI. Looking at the steps gives me the impression they are for those who have some technical savvy.

The Domotz support site also has instructions for installing the agent on a NAS. If you have the right NAS, the NAS steps appear no harder than installing any other application on your NAS. The upcoming Domotz Mini product should expand the product's appeal to those without technical savvy or a NAS. In my mind, Windows and Linux-based agents could also expand the product's appeal.

When you first start the agent, it prompts you to set up an account. All I had to enter was an email address and password, no credit card. Once you've got the agent running, it presents this message, while discovering devices:

It can take up to 15 minutes to discover all the devices in your network. We use a continuous discovery procedure after the initial scan.

I mirrored the switch port my Domotz agent was connected to, to take a look at its discovery procedure. It looks like the Domotz agent is continuously sending Address Resolution Protocol (ARP) requests to every IP in your local subnet. As you can see in theWireshark trace screenshot, Domotz is sending ARP requests from the agent (172.24.2.141) to consecutive IPs in my network subnet (172.24.2.0/24). Once a device is discovered, Domotz maintains a "heartbeat" between the Domotz agent and the device every 30 seconds.

Once the Domotz agent is installed and running, it communicates everything to Domotz' cloud. From that point, you view and manage your network via either a browser or iOS or Android apps. Domotz has a pretty good knowledge base covering most aspects of both the web and handheld apps.

The web interface is available on Domotz' website. All you do is log in with the same email address and password you used during account setup. From the web app, you will see the dashboard below, identifying the number of discovered devices, results of a recent network speed test, configured alerts, and options for collaboration and providing the app to a friend. I had no problem running the browser interface on a Windows 10 PC using Chrome, Firefox, and MS Edge.

I also installed the app on an iPhone 5s running iOS 8.1.3. The dashboard on the handheld app is pretty much the same as the web app, designed to fit a handheld screen, shown below.

The Domotz agent lists discovered devices by MAC, so you'll want to manually edit each device with a specific name and location, device type/icon (there are about 30 pre-built device type/icons, such as game console, NAS, network equipment, PC & Notebook, Mobile, etc...), specify device category (Important or Indifferent, (indifferent = not important), and whether the device is flagged as Favorite. The categories and favorite flags are helpful in grouping devices in the device view. The below screenshot shows a partial list of devices on my test network. I've edited the device names, their locations, and their device type/icons.

The Domotz agent monitors devices by sending a heartbeat to each device every 30 seconds. In the History section of each device on the app, you can see when each device's heartbeat is lost and recovered. Knowing the number of devices on line and when they're on line is a useful network troubleshooting tool. If a larger number of devices are using the network at the same time, like in the evening, you have a possible indicator of slow network performance, resulting in symptoms like lower quality Netflix streaming.

Domotz device monitoring also appears to be useful as a parental tool for tracking TV and Video Game usage. I have a PS3 on my network and the Domotz device history in the app, shown below, lists the times and dates it has been on and off based on when the Domotz agent received a response to the heartbeat.

Discuss this in the Forums

VLAN How To: Segmenting a small LAN

How To: One Internet connection - Two Private...

Switch Your Network To IPv6

When Flow Control is not a Good Thing...

Check out our Wi-Fi System Charts, Ranker and Finder!

If you like what we do and want to thank us, just buy something on Amazon. We'll get a small commission on anything you buy. Thanks!

Most Read This Week

Over In The Forums